Libvirt has some nice migration features in the latest RHEL/Centos 6.4 to let you move virtual machines from one server to the other, assuming that you . But if you try it with VM's set to auto-start on server startup, you'll swiftly run into problems the next time you reboot your compute servers -- the same VM will try to start up on multiple compute servers.

The reality is that unlike ESXi, which by default locks the VMDK file so that only a single virtual machine can use it at a time, thus meaning that the same VM set to start up on multiple servers will only start on one (that wins the race), libvirtd by default does *not* include any sort of locking. You have to configure a lock manager to do so. In my case, I configured 'sanlock', which has integration with libvirtd. So on each KVM host configured to access shared VM datastore /shared/datastore :

Now set up sanlock to start at system boot, and start it up: On the shared datastore, create a locking directory and give it username/ID sanlock:sanlock and permissions for anybody who is in group sanlock to write to it: Finally, you have to update the libvirtd configuration to use the new locking directory. Edit /etc/libvirt/qemu_sanlock.conf with the following: Everything else in the file should be commented out or a blank line. Host ID must be different for each compute host, I started counting at 1 and counted up for each compute host. And edit /etc/libvirt/qemu.conf to set the lock manager: (the line is probably already there, just commented out. Un-comment it). At this point, stop all your VM's on this host (or migrate them to another host), and either reboot (to make sure all comes up properly) or just restart libvirtd with Once you've done this on all servers, try starting up a virtual machine you don't care about on two different servers at the same time. The second attempt should fail with a locking error., At the end of the process it's always wise to shut down all your virtual machines and re-start your entire compute infrastructure that's using the sanlock locking to make sure everything comes up correctly. So-called "bounce tests" are painful, but the only way to be *sure* things won't go AWOL at system boot. If you have more than three compute servers I instead *strongly* suggest that you go to an OpenStack cloud instead, because things become unmanageable swiftly using this mechanism. At present the easiest way to deploy OpenStack appears to be Ubuntu, which has pre-compiled binaries on both their LTS and current distribution releases for OpenStack Grizzly, the latest production release of OpenStack as of this writing. OpenStack takes care of VM startup and shutdown cluster-wide and simply won't start a VM on two different servers at the same time. But that's something for another post. -ELG
Posted by Eric Lee Green at 1:28 PM No comments:

On spinning rust and SSD's.

I got my Crucial M4 512GB SSD back for my laptop. It failed about three weeks ago, when I turned on my laptop it simply wasn't there. Complete binary failure mode -- it worked, then it didn't work. So I took it out of the laptop, verified in an external USB enclosure that it didn't "spin up" there either, installed a 750Gb WD Black 7200 rpm rust-spinner that was in my junk box for some project or another, and re-installed Windows and restored my backups. Annoying, but not fatal by any means. I've had to get used to the slow speed of spinning rust again versus the blazingly fast SSD, but at least I'm up and running. So this weekend I get to make another full backup, then swap out the rust for the SSD again.

At work I've had to replace several of the WD 2TB Enterprise drives in the new Linux-based infrastructure when smartd started whining about uncorrectable read errors. When StorStac got notification of that sort of thing it re-wrote the sector from the RAID checksums and that usually resolved it. The Linux 3.8 kernel's md RAID6 layer apparently doesn't do that, requiring me to kick the drive out of the md, slide in a replacement, fire off a rebuild, and then haul the drive over to my desktop and slide it in there and run a blank-out (write zeroes to the entire drive). Sometimes that resolves the issue, sometimes the drive really *is* toast, but at least it was an analog error (just one or two bad places on the drive), not a complete binary error (the entire drive just going blammo).

SSD's are the future. The new COW filesystems such as ZFS and BTRFS really don't do too well on spinning rust, because by their very nature they fragment badly over time. That doesn't matter on SSD's, it does matter with rust-spinners, for obvious reasons. With ZFS you can still get decent performance on rust if you use a second-level SSD cache, that's how I do my backup system here at home (which is an external USB3 hard drive and an internal SSD in my server), BTRFS has no such mechanism at present but to a certain extent compensates by having a (manual) de-fragmentation process that can be run from time to time during "off" hours. Still, both filesystems clearly prefer SSD to rotational storage. It's just the nature of the beast. And those filesystems have sufficient advantages in terms of functionality and reliability (except in virtualized environments as virtual machine filesystems -- but more on that later) that if your application can afford SSD's, that alone may be the tipping point that makes you go to SSD-based storage rather than rotational storage.

Still, it's clear to me that, at this time, SSD is still an immature technology subject to catastrophic failure with no warning. Rotational storage usually gives you warning, you start getting SMART notifications about sectors that cannot be read, about sectors being relocated, and so forth. So when designing an architecture for reliability, it is unwise to have an SSD be a single point of failure, as is often done for ESXi servers that lack hardware RAID cards supported by ESXi. It might *seem* that SSD is more reliable than rotational storage. And on paper, that may even be true. But the reality is that because the nature of the failures is different, in *reality* rotational storage gives you a much better chance of detecting and recovering from a failing drive than SSD's do. That may, or may not be important for your application -- in RAID it clearly isn't a big deal, since you'll be replacing the drive and rebuilding a new drive anyhow -- but for things like an ESXi boot drive it's something you should consider.

Posted by Eric Lee Green at 8:47 AM No comments:

I must admit that I have a low opinion of journalists, tech journalists in particular. I've been interviewed several times over the years and only once has the result been accurate. In all the other cases, what I said was spun to fit the journalist's preconceived notion of what the story should be, and to bleep with the truth.

What I cannot understand is why, if a tech journalist cannot interview people in the know because they had to sign a NDA in order to obtain certain assets for a specified price, said journalist would go ahead and publish a story based entirely upon speculation and a single source that may or may not know the details of whatever legal agreements were signed. It's not professional, it's not ethical, and it's not right. But it's the way tech "journalism" is done here in the Silicon Valley. I guess making a living by being unprofessional and unethical doesn't bother some people. So it goes. 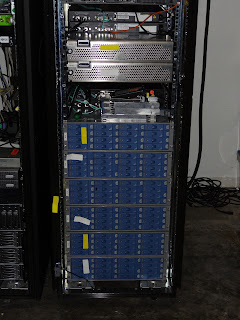 Posted by Eric Lee Green at 5:22 PM No comments: